Baltimore Traces is a collaborative teaching innovation that brings together UMBC classes from a variety of disciplines  to create media focused on Baltimore residents and neighborhoods. It builds on previous interdisciplinary collaborations including Mill Stories (Michelle Stefano and Bill Shewbridge) and Mapping Baybrook  (Nicole King and Steve Bradley).  In addition to the videos, photos and oral histories collected on the project site,  Baltimore Traces works with the Center for Emerging Media (CEM), a Baltimore non-profit founded by radio host Marc Steiner to create radio programming. This collaboration began in spring, 2014, when students from four UMBC classes teamed up to produce Stories of Deindustrialized Baltimore, a five-part radio series aired on the Marc Steiner Show on WEAA 88.9 FM.

The project expanded in the spring 2015 as part of a Hrabowski Innovation Grant, “Baltimore Stories: Emerging Media Across the Curriculum.”  The project continues to evolve, with new projects focusing on Baltimore’s many neighborhood developing each semester. Since its beginning, public programming has been an integral part of the project. Visit our Events page for upcoming film screenings, mapping dialogues and community forums.

All of the project’s media, which in addition to podcasts include digital maps, films, and zines, are archived here on the project website. The project has Institutional Review Board (IRB) approval and informed consent forms that are available for use in all associated courses. The foundational question of the project is “How do neighborhoods change and how do people feel about those changes?” Working together to produce and share the engaging stories of city neighborhoods brings wider attention to issues such as deindustrailization, redevelopment, and gentrification while broadening student perspectives on their place in a broader community. 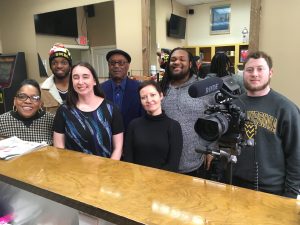